This application renders several donuts and a background grid to stress test the Varjo API.

Use main.cpp as a starting point. It contains the main rendering loop and all the frame logic that is not related to graphics.

Gaze tracking implementation can be found in the GazeTracking.cpp file. Examples include:

The mixed reality example can be found in the examples folder which is downloaded with Native SDK package.

Mixed reality example shows how video see through can be enabled and how virtual content can be drawn to the same scene. It also allows changing settings for video see through cameras and shows how virtual content color can be adapted to the applied current camera settings. The example also provides access to video depth test and view offset features.

An example of using chroma key can be found in the examples folder included in the Native SDK package. Open the ChromeKeyExample folder and study the main.cpp file to see an example of using the chroma keying feature. The example will show you how to enable chroma key mode, and how to adjust target color and tolerances for chroma keying. Color parameters are represented in the HSV (hue, saturation, brightness value) color space. The hue component specifies an angle on the color wheel, saturation indicates colorfulness, and brightness value denotes intensity. ChromaKeyExample implements a minimalistic VR scene that clears the render targets with a solid color. This is useful as a visualization of the mask produced by the applied chroma key parameters. In actual use the example scene would be replaced by the application’s VR scene, which would then be masked with a chroma key mask. Pressing F1 in the example scene will show a built-in help menu that explains the different keyboard commands. The example is also documented in the source code. You can find all chroma key API calls in the ChromaKeyManager class included in this project. The class provides examples for locking and managing configurations, as well enabling and disabling the chroma key feature for your application.

Be aware that ChromaKeyExample only serves as an example of how the endpoints can be used, and that these Common helper classes are not meant to be production-quality utility classes for integration.

An example of using Varjo marker can be found in the examples folder included in the Native SDK package. Open the MarkerExample folder and study the MarkerScene.cpp file to see the basic Varjo marker implementation. The example application enables video pass-through and allows the user to see a virtual marker in place of the Varjo marker in their view. In suitable conditions (with good lighting, no reflections, no bending or curing, and a correctly-sized printed marker), the Varjo marker and virtual marker should align perfectly. The example application also allows a user to preview how many markers are visible in the view at any given time.

Be aware that MarkerExample only serves as an example of how the endpoints can be used, and that these Common helper classes are not meant to be production-quality utility classes for integration.

The multi-app example shows how to overlay multiple applications on top of each other using session priorities. It renders floating cubes on a background that can be either transparent or non-transparent.

The example uses the MRExample application included in the examples folder of the Native SDK package. MRExample accepts the following command-line arguments:

Assigning priority for an application:

Setting a transparent background for MRExample: 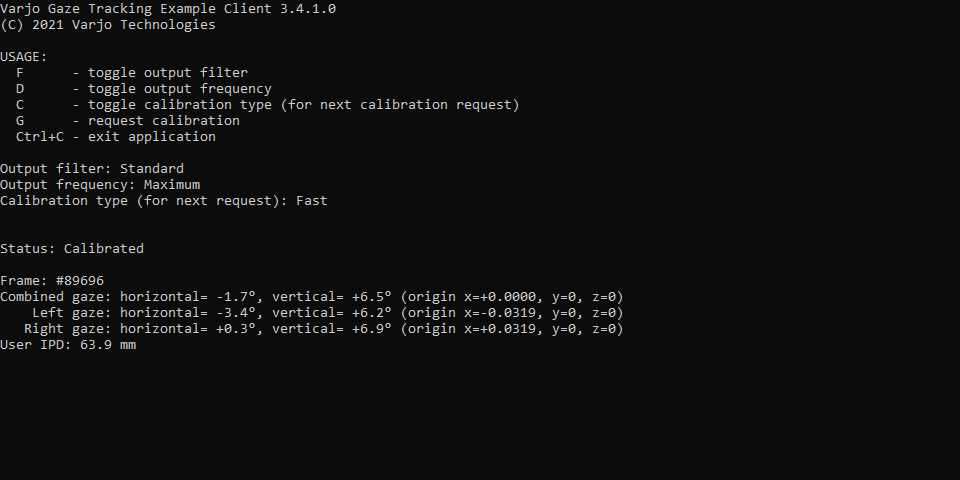 User can see output changing in console window in accordance to where user is currently looking at, and also whether one of the eyes is currently open or closed.

See also “DataStream API documentation” for more information about the API used by the example application.