This page shows the recommended settings for maximizing performance and visual quality for Varjo headsets. Please note that some of the features are not yet supported yet (see notes in the corresponding section).

Refer to the Unreal OpenXR roadmap for an estimated timeline for fixing Instanced Stereo and post-process effects for OpenXR.

Unreal Engine 5 defaults to DirectX 12. DirectX 12 support for OpenXR will be added in a coming Varjo Base release. Until then, switch Default RHI to DirectX 11 in Project Settings > Platforms > Windows > Targeted RHIs.

Instanced Stereo is not supported for Varjo headsets with Unreal Engine 4.27 or 5.0.0.

Mobile Multi-View is not supported for Varjo headsets with Unreal Engine 4.27 or 5.0.0.

We recommended that you keep foveated rendering enabled when using the Varjo OpenXR plugin. Foveated rendering makes use of the eye tracking functionality in Varjo headsets to improve performance by reducing the image quality in peripheral areas where the user is not looking. Read more about supported dynamic viewport foveated rendering.

When using Hardware Occlusion Queries the Actor’s visibility is read back one frame later, which can cause them to “pop in” if the camera is moving very fast. This can further cause rendering artefacts with Varjo’s four-viewport setup, especially when using foveated rendering.

You can also use MSAA anti-aliasing with Forward Renderer. Go to Edit > Project Settings… > Rendering > Default Settings and select MSAA in the Anti-Aliasing Method:

Vignette is not supported for Varjo headsets with Unreal Engine 4.27.

Vignette settings can be found from PostProcessVolume Details under Lens > Image Effects. In order to disable Vignette, select Vignette Intensity and set the value to 0.0. 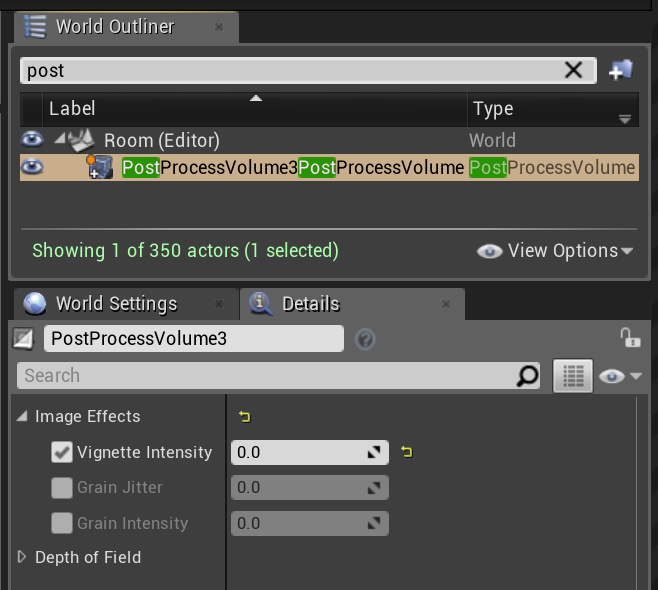 Bloom is not supported for Varjo headsets with Unreal Engine 4.27.

We recommend that you disable the Bloom post-process effect for VR, since it doesn’t perform optimally in VR. Go to Edit > Project Settings… > Rendering > Default Settings and deselect Bloom:

Lens flares work well on the screen but feel out of place in VR. We therefore recommended that you disable them. Go to Edit > Project Settings… > Rendering > Default Settings- and deselect Lens Flares (Image based):

Due to the specifics of Unreal Engine and the Bionic Display™, auto exposure does not work correctly with Varjo headsets. We recommend using manual and fixed exposure and, for example, disabling the PostProcessVolume camera settings.

In the picture below, we have enabled the Manual metering mode which means that we use only camera settings. The settings are manually tuned to make the VR scene look sharp. As the optimal values depend heavily on the scene, we cannot give specific recommendations for the values and visual tuning is needed.

We recommend that you carefully observe the darkest and most highlighted areas of your scene while trying out the different settings. Note that any lights set in the scene also affect the end result.

In general, motion blur works better on a desktop computer than in VR. We recommend that you disable VR motion blur. Go to Edit > Project Settings… > Rendering > Default Settings and deselect** Motion Blur:

Planar reflections are not supported for Varjo headsets with Unreal Engine 4.27.